Globally, we need to transition away from fossil fuels, which are responsible for 80 per cent of greenhouse gas emissions.

The focus at COP26, which ended Friday in Glasgow, is on five-year updates to countries’ Nationally Determined Contributions to reducing emissions — their formal pledges enshrined in the Paris Agreement.

Going into COP26, which I’m attending as an observer, the combined pledges would hold warming to 2.7 C, and the goal is to ensure the commitments would limit the increase closer to 1.5 C. At the heart of the COP26 climate negotiations are the pathways we can take to disentangle our communities and economies from fossil fuels and achieve a just transition.

COP26 has kicked off announcements and discussions of ways to achieve the Paris Agreement goals. These transitions involve complex transformations in energy technology, investment and values. Some of these discussions are suggesting technologies that aren’t currently market-ready or scaleable, including nuclear small modular reactors.

As workers have concerns about their future, and communities and industries are being asked to adopt new technologies and innovate, these pledges to transition our energy systems, communities and economies mean that people need information to make decisions about low-carbon technology and its effects within their context.

In Canada, at the core of an energy transition is the electrification of our economy — particularly of industry, heating and transportation.

Globally and in Canada, energy transitions require unprecedented investments. They will bring major societal changes, with the potential for inequitable impacts on people and nature. They may create further disparities between wealthy and less-wealthy people, communities and countries.

What dominated the talks of just transition was a strong emphasis on renewable energy. A Powering Past Coal Alliance event featured presenters from labour, industry and government, announcing over 165 phaseouts of unabated coal use — coal that is burned without accompanying measures to reduce or capture emissions. The Powering Past Gas event stressed that natural gas is a bridge fuel to nowhere — it will simply become a stranded asset by the time new supplies are in place.

These events stressed renewable energy transitions as the solution.

Renewable energy is on the market, and has become the cheapest and fastest energy technology to deploy right now. It is associated with a just transition that is gender equitable and inclusive. Most regions have access to both solar and wind power. A study launched at COP26 by the University of Technology Sydney shows that a global transition to 100-per-cent renewable energy is possible for all sectors — industrial, commercial and residential. Renewable energy can be a source of local economic development and community revitalization that provides jobs for those in industries in transition. Renewable energy can contribute to community revitalization by providing new forms of revenue for rural and Indigenous communities. The Vuntut Gwich’in First Nation, above the Arctic Circle, replaced diesel-fuelled generators with renewables and can now hear the sounds of nature for the first time in decades.

However, at least in Canada, communities are being surveyed for their acceptance of nuclear small modular reactors that are pitched as a form of reconciliation and are not likely to be available in the timeframe we have to mitigate climate change.

According to the International Energy Agency, 38 technologies are ready for mass deployment, but only four of these, including solar photovoltaic and energy conservation technologies, are penetrating markets sufficiently to allow warming to be limited to 2 C.

In a powerful speech, Barbados Prime Minister Mia Mottley reminded the world that since the economic downturn in 2008, the wealthiest nations have spent $25 trillion on economic recovery, of which $9 trillion was spent during the pandemic. While that amount could have been used to keep the planet within 1.5 C global temperature rise, much of it was spent on COVID economic recovery for the fossil fuel industry.

The final decision at COP26 only calls to accelerate “efforts towards the phase-down of unabated coal power and phase-out of inefficient fossil fuel subsidies” rather than committing to the phasing out of both fossil fuels and their subsidies. 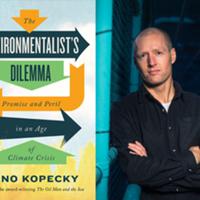 ‘There Are No Perfect Solutions. But that Doesn’t Mean There Aren’t Ways Forward’

Renewable energy transitions won’t be easy, and to ensure a just transition they require planning and implementing changes to the way we have used energy differently by bringing together communities, industry and policy-makers to tailor solutions and technology mixes for particular contexts. This is because renewable energy is a more landscape-specific technology than fossil fuels, affecting land uses, communities and natural settings, and every context is different in terms of industrial and community needs and transitions.

As the impacts of climate change continue to affect us in the form of heat waves, intense storms, fires and flooding, we need solutions that protect biodiversity and livelihoods and provide resilience rather than risk to communities.

In a survey of technology across COP26, the only low-carbon technologies that are available and ready for mass diffusion are renewable energy and energy conservation technologies.

This needs to be considered by communities, workers and decision-makers as they choose energy transition pathways under our short timeframe to limit warming.

*Story updated on Nov. 15 at 2:30 p.m. to include additional information from the COP26 final statement.