Aloha, Alberta! Jason Kenney doesn’t give a hoot* what you think.

That’s the key takeaway from the premier’s defiant New Year’s Day news conference about the cabinet minister who jetted off for a Hawaiian vacation while she was supposedly responsible for the province’s emergency management and boss of the civil servant running Alberta’s leisurely COVID-19 vaccine rollout, not to mention other vacationing United Conservative Party MLAs and political staffers.

There will be no consequences.

Not for any of the missing MLAs, if we could even find out which ones were missing. Not for the government press secretaries sunning themselves on the beaches of Hawaii or visiting relatives in the United Kingdom. (By Sunday, the list included two other UCP cabinet ministers, two other MLAs and four UCP political staffers.)

Kenney’s reasoning can be summarized as follows:

Kenney’s justification, if you can call it that, was as follows: “I don’t think it’s reasonable for me as a leader to sanction people who very carefully followed the public health orders and the legal requirements.”

And how do we know they followed the rules? Well, I guess that’s for them to know and us to find out.

You just can’t make this stuff up. Ontario Premier Doug Ford, who fired Finance Minister Rod Phillips for doing the same thing, looks like a statesman by comparison. And the NDP removed Manitoba MP Niki Ashton from her shadow cabinet posts for travelling to Greece to visit a sick relative without informing party Leader Jagmeet Singh.

Social media commentators called Kenney’s news conference the most outrageous event in Alberta political memory since Ralph Klein got drunk and threw pocket change at the residents of an Edmonton men’s shelter.

Arguably, though, this is worse. We’re talking about putting people’s lives in danger, and undermining the whole fight against COVID-19, not just acting like a drunken jackass. Remember, Klein had a driver, and he even made a stab at quitting drinking.

You have to give Kenney credit for his sheer brass. The man has no shame. There will be one set of rules for insiders, another for the rest of us, and if you don’t like it, I guess you can move. All done in the unshakable conviction the UCP will win the next election no matter what anyone says.

The premier claimed he was unaware until Tuesday that Allard was in Hawaii. As former NDP and Progressive Conservative cabinet ministers explained, that’s not the way it works.

“Any minister who is out of the province is covered by another minister,” tweeted former Alberta NDP leader and cabinet member Brian Mason. “The Premier’s office and the bureaucracy ensure it. Papers are signed, etc. It’s all very official. If @Jkenney says he didn’t know that @TracyAllardUCP was in Hawaii, then he’s lying.” 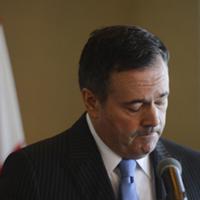 What If Jason Kenney Did Take Responsibility?

Kenney did admit one thing everyone already knew: that Jamie Huckabay, his chief of staff, had been vacationing in England when Canada closed its borders to flights from the U.K. because of the new, more highly infectious variant of the coronavirus.

No problem, though. Huckabay just flew to the United States and came home from there. All right then! No rules were broken.

For her part, Allard is very, very sorry. And very, very relieved, as well, I’m sure.

At a late afternoon newser of her own, she explained that visits to Hawaii are a family tradition, but now that she’s thought about it she’s “truly and deeply sorry.” Luckily, family gatherings are only prohibited if you can’t afford to travel overseas. Like I said, you can’t make this stuff up.

Allard was out of the country from Dec. 19 to Dec. 28, so that means she was in Hawaii when she posted a photo of herself by the Christmas tree in the legislature’s rotunda on Instagram. Obviously this was intended to give the impression she was here in Alberta. 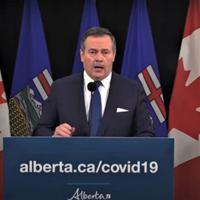 The premier spent lots of time at his media conference blaming the federal government for Alberta’s vaccination program, which is as slow as molasses in springtime. Of course there was no acknowledgment of the fact other provinces are doing better despite having the same federal government.

Now that the horses are gone, Kenney has ordered the barn door slammed shut. That is to say, now that the holiday season is almost over, he has issued a directive telling staffers and elected officials to stay home.

Even Postmedia’s Rick Bell, normally the most loyal of Kenney loyalists in media, said he was “gobsmacked” by what Premier Kenney had to say.

It’s hard to take issue with that.

But then, look at it from Kenney’s point of view. If he fired Allard for this, he might end up having to fire a lot more of his cabinet when it starts leaking out who else was enjoying a privileged winter holiday abroad.

Entitlement: It ought to be in the UCP’s name.

UPDATE: This afternoon, Kenney issued a statement saying that Allard had resigned her ministerial post and Huckabay had quit as his chief of staff. Five other United Conservative Party MLAs had also been demoted because of their holiday travel, the statement said.

*No profanity was used in the composition of this column. That was a challenge.