David Hughes, one of the nation’s foremost energy analysts, has a simple message for the governments of British Columbia and Canada when it comes to advocating for LNG projects.

Hughes has parsed the numbers and they don’t add up on methane emissions, climate change targets, resource royalties, job benefits or even basic economics.

“The math is clear,” says Hughes, whose latest 57-page report on LNG exports, published by the B.C. office of the Canadian Centre for Policy Alternatives, highlights a long pipeline of damning figures.*

The province’s CleanBC plan, for example, demands an 80-per-cent reduction in greenhouse gas emissions by 2050 from 2007 levels.

But Hughes, who was a scientific researcher for 32 years at the Geological Survey of Canada, checked the math on emissions based on energy production forecasts made by the Canada Energy Regulator.

His math is conservative. It excluded any LNG exports. It assumes current high levels of methane leaks from gas extraction might be reduced. And it further assumes the electrification of some upstream projects. Still, Hughes found that “emissions from oil and gas production would exceed B.C.’s 2050 target by 54 per cent.”

Now, in B.C., add Shell’s LNG Canada project, a $18-billion terminal now under construction in Kitimat, to the equation. With just that one project — of three with 40-year export permits — emissions from oil and gas production will exceed the province’s 2050 target by 160 per cent.

And that is “even if emissions in the rest of the economy were reduced to zero by 2035.”

Hughes explodes a comfortable myth advanced by politicians and corporate leaders promoting a soft, have-it-all path away from climate calamity.

“Unfortunately, no amount of wishful thinking can overcome the math on the emissions generated by increased oil and gas production and the proposed LNG exports,” he concludes.

China’s pollution: Won’t our LNG beat their coal? No, here’s the math

But what about the math on how LNG will reduce the carbon footprint of coal-burning China?

Cheerful LNG lobbyists claim, for example, that “B.C. can play a key role in reducing China’s and the world’s carbon footprint immediately.”

Hughes did the math again, and found such statements have no basis in physical reality. For starters China is a leader in high efficiency coal plants and that’s what Canadian LNG must compete against financially and in terms of emission reductions.

And by those terms Canadian LNG just doesn’t fare well. LNG exports depend on an industrial system that leaks methane profusely. Clouds of methane escape from the fracking of shale formations, pipeline networks, liquefaction plants, shipping and regasification. And they do so in volumes grossly underestimated by industry and government.

These fugitive leaks pose a big problem because methane has a much larger impact on global warming than carbon dioxide. Compared to CO2, the same amount of methane emitted over 20 years would, in fact, cause 86 times the impact, and over 100 years 34 times the impact.

Given these scientific realities, reducing methane in the short term has to be the priority of every government genuinely concerned about climate disruption.

But once Hughes did the math on leaking methane and its shorter-term impact on the climate, he found that Canadian LNG is dirtier than the burning of high efficiency coal over a 20-year period.

With a more realistic leakage rate of 3.3 per cent, China’s best-coal-fired technology would have 18.5 per cent fewer emissions than B.C. LNG over a 20-year time frame.

In simple terms the numbers show that Canadian LNG aggravates the climate problem over the next two decades “which is a very critical period in addressing the global warming problem.”

Revenues: Doesn’t LNG pay for what we want? No, check BC’s bottom line

But what about the claims that LNG exports will make British Columbians rich? Or that methane royalties will build hospitals and roads? Or dig First Nations communities out of poverty?

Hughes did the math again on volatile methane pricing and found that the extraction of gas has been contributing less and less to government coffers as its price has tanked thanks to North America’s debt-ridden fracking revolution which began nearly a decade ago.

Hughes tabulated revenue from taxes, royalties and land sales and found they were all declining despite record production since 2005.

While B.C.’s government encourages the extraction of more methane by granting tens of millions of dollars annually in royalty and tax breaks and credits, the owners of the resource, the people of B.C., have been earning less and less. Even though production has doubled since 2005, total royalty revenue is down by 84 per cent.

With virtually no public return B.C. is now liquidating the last best sweet spots remaining in the Montney basin in northeastern B.C.

These calculations, says Hughes, don’t support the rhetoric that LNG exports “will provide a windfall to fund vital government services.”

At this point a discerning taxpayer might ask whether the bet is worth it because the world will eventually pay a good price for the LNG B.C. is readying itself to export.

The math here is ruinous.

In addition, the industry suffers from a global LNG glut, at a time when more projects are slated to come on stream a couple of years from now. So, too, is a Russian natural gas pipeline that will deliver cheap methane to China.

“Landed LNG prices in Asia would have to increase dramatically for Canadian LNG exports to be profitable,” calculates Hughes.

These sober figures likely explain why Woodside and Chevron, owners of the moribund Kitimat LNG project, have written off billions in losses and want to sell their respective stakes in that doomed project.

They and a host of other troubled LNG developers might have some problems doing that according to a new report by the Global Energy Monitor.

It calculates that as the competition from renewables intensifies and more governments raise concerns about LNG emissions and fracking, many LNG terminals will become “underutilized or stranded assets long before their useful life of 30 to 40 years.” At least 11 major LNG projects around the world are experiencing “significant new difficulties,” including low prices.

The Oxford Institute for Energy warned last year that the LNG industry now faces two challenges to its very existence. Many global markets can’t support a product costing more than $6 per million BTU and fewer and fewer countries will buy the product without transparent reporting on its climate footprint, including the fracking of shale formations.

Lastly, what about jobs? LNG lobbyists, such as Resource Works, contend that LNG projects will create thousands of jobs paying more than $100,000 a year.

The math doesn’t support such claims. LNG projects are capital intensive, not labour intensive. Most of the work on construction is done overseas. Yes, a few thousand workers will be required to assemble the modules and the pipes. But after this brief boom, LNG Canada won’t employ more than 500 people.

That begs one more question for every taxpayer in B.C. and their NDP government. Does the employment of 500 people on a climate-destroying project that earns the province scant revenue justify a nearly $60 million per year subsidy in electricity prices for LNG and fracking developers; a $60 per year million break in carbon taxes; a three per cent cut in corporate income tax; a $21-million per year deferral on provincial sales tax; a loss of $375 million on waivers of tariffs on imported steel from China; and the construction of an uneconomic $10-billion dam to provide subsidized water and electricity for fracking and LNG developers?

How does all that add up?

The basic point that Hughes wants to make is this: “We have to rethink the oil and gas business if we are serious about meeting emission targets.” 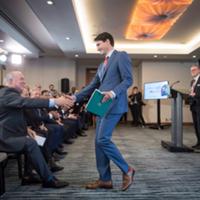 Which in turn means having a serious conversation about an end to continuous economic growth and consumption.

It also means that the Canada can no longer rely on exports of more bitumen or methane. Or call such products “ethical.”

Politicians instead should encourage a planned, substantial reduction in fossil fuel consumption at home combined with the creation of a hybrid energy culture that uses both renewables and fossil fuels much more intelligently and efficiently than ever deployed in the past.

In addition, Hughes offers this blunt advice for B.C. Premier John Horgan and his clique of LNG-advocates who still claim, just like Alberta Premier Jason Kenney, that they can export unconventional fossil fuels, get rich and fight climate change at the same time.

“You should cease, desist and back up and do the math.”

* Story updated on July 9 at 12:30 p.m. to include information about David Hughes report on LNG exports.