There’s a hole in B.C.’s climate plan big enough to drive a subdivision through.

More frustrating is that local governments are ultimately creatures of the provincial government. This means the B.C. government is essentially working against itself.

The CleanBC plan includes all kinds of policies, from efficient buildings to promoting electric vehicles to workforce training. But it’s strangely silent on the number one municipal climate issue: suburban sprawl.

Transportation accounts for the most emissions at the city level, and those emissions are driven by development patterns. If municipalities approve dense development close to services, people can walk, bike or be well served by transit. If they approve spread-out subdivisions far from services, people have no choice but to get in their vehicles every time they leave the house.

And no, electric vehicles will not save us from bad development decisions. While a growing minority of people are indeed going electric, they still account for less than four per cent of new car sales in Canada. Meanwhile, many buyers are increasingly shifting to gas-guzzling trucks and SUVs, making Canada’s fleet the least efficient in the world.

This is a policy failure in itself, but also a reminder that there is no one fix to climate change. We need to do it all, and local governments must play their part.

Sprawl also requires more energy to build and to service, with more roads and longer sewer and water systems. It’s more expensive for local governments, putting upward pressure on taxes, and is less conducive to building affordable housing. It’s a bad deal all round.

So why the reticence to tackle it? Because it means taking on old school developers and local government officials around B.C. — both elected and otherwise — who are used to churning out low-density subdivisions and who will fight changes to the status quo.

It was then-premier Gordon Campbell who formally introduced the climate conversation at the municipal level back in 2008 when he passed legislation requiring local government Official Community Plans to set emission reduction targets.

Unfortunately, he didn’t say that anyone actually had to meet those targets. Unsurprisingly, nobody did.

This is not to say there aren’t climate-minded councillors across B.C. trying their best to turn things around. Local governments have several potential tools at their disposal to curb sprawl, and these are deployed with varying degrees of success, sometimes over the resistance of city staff who are used to a certain way of doing things and who are cozy with developers who are used to the same. But we need to end sprawl now, not just slow it down a little bit.

Here’s an example of how hard this is. Recently a councillor in the Cowichan Valley on Vancouver Island introduced a motion to limit sprawl while a new greener Official Community Plan could be developed. Opponents in the development industry showed up at city hall with their trucks, circling and honking their horns in an act of intimidation that ultimately worked. The motion failed and more sprawl — and more emissions — will be the result.

B.C.’s local governments aren’t going to end sprawl and systematically reduce emissions unless they have to. There is just too much inertia in the system, with the default development option outside of major city cores based on building low-density single-family homes. And local governments are unwilling or unable to standup to the developers who want to keep it that way.

Campbell’s 2008 foray into ways of greening municipal governments desperately needs an update. Without it, the CleanBC effort will continue to have a massive hole.

What government could do

At a minimum, the B.C. government should require climate accountability from local governments. The provincial government recently passed accountability legislation for itself that requires it to set interim emission targets and report annually — with specific figures — on its progress.

B.C.’s municipalities need similar accountability requirements. There is currently no systematic reporting on how local governments are doing relative to their climate targets, and little inclination to even talk about it. This needs to change.

But the climate crisis — and the housing crisis — demands much more, and quickly. 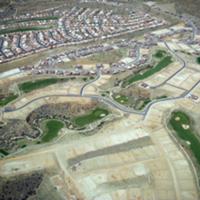 Urban Sprawl Is Not More Affordable

We need a green building boom of dense affordable housing built close to services and well served by transit, effectively ending urban sprawl and at the same time creating jobs. Such a boom could be a core part of a “green new deal.”

But we will simply not get there without the province taking responsibility and mandating new development patterns that get people out of their vehicles.

But we really have no choice if we want our kids to have a fighting chance at a livable future.